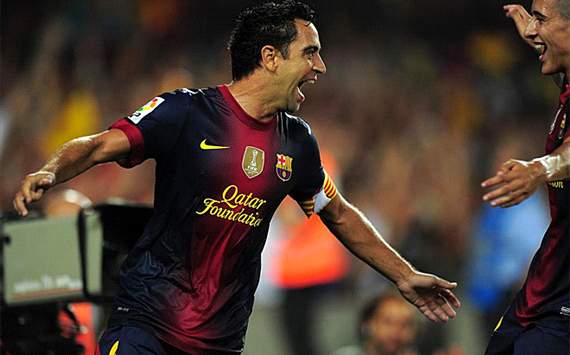 Barcelona playmaker Xavi has said his side have a big opportunity to go 11 points ahead of fierce rivals Real Madrid in Sunday’s Clasico clash at Camp Nou.

The Blaugrana have taken a maximum 18 points from their opening six matches, while Madrid lie eight points adrift, after picking up only four points in their first four fixtures.

“It would be a very important victory, which would calm nerves and leave our main rivals 11 points behind us,” the Catalan midfielder told reporters.

“It’s a big opportunity but nothing decisive. There’s still plenty of life left in the league whatever happens.

“We’ll try to enjoy it and make the public enjoy it too. We’re arriving in good shape, despite [Carles] Puyol’s injury.”

Barca’s captain will miss the tie on Sunday after suffering a dislocated elbow in Tuesday’s Champions League victory over Benfica, and is now set to spend two months on the sidelines.

“He’s putting all his effort into being able to play. He’s been 10 days without training and it’s difficult,” said the Spain international.

“I saw him in the gym just now. I think he’s half way towards knowing if he’ll play or not.”

Xavi also spoke about the political context surrounding the match.

“We aren’t the ones who are making El Clasico a political issue,” said the Spain international.

“We know the situation that Catalonia’s in at the moment, but we’re putting our energy into playing football. It’s a football game, nothing political.

“We need to have the ball and stay true to our playing philosophy, so we can stop Madrid’s attacks before they happen.

“We just have to think about winning and focus on ourselves, and not about the atmosphere in the Madrid dressing room,” he added.