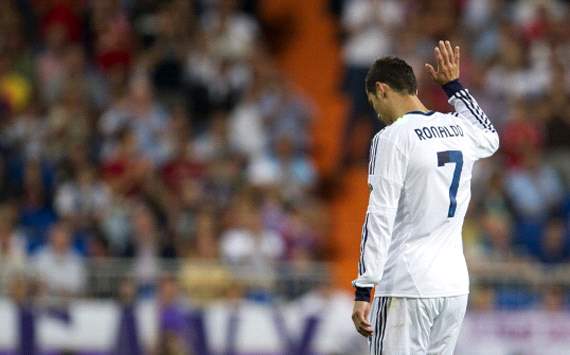 Former Real Madrid defender Enrique Perez Diaz, nicknamed Pachin, feels that Cristiano Ronaldo’s recent revelation that he is unhappy with life at the Santiago Bernabeu is nothing more than a cry for attention, and is confident the Portugal international will stay in the Spanish capital.

The 27-year-old refused to celebrate his two goals in Madrid’s 3-0 win over Granada at the weekend, and stated after that match that he was unhappy for professional reasons, adding that the club knew about the reasons for his melancholy.

Nevertheless, Pachin is unimpressed by the prolific attacker’s behaviour, and believes that he would have expressed his dismay with his situation at an earlier stage if he really wanted to leave the club.

“In my eyes it is a bit like a toddler throwing a tantrum. I do not think that Ronaldo is really unhappy at Real Madrid. He would have spoken up before if that was the case,” he told Goal.com.

“Why would he not be happy at Madrid? The team is built around him, which makes perfect sense as he is an extraordinary player.

“Every player is happy at Real Madrid, and so is Ronaldo. If he wanted to leave, he would have said so before, not now that the transfer market’s closed.”

The 73-year-old, who played for Madrid between 1959 and 1968, went on to stress that the club should straighten things out as soon as possible, but dismissed the notion that Ronaldo is after a pay-rise.

“Real Madrid should not do too much about this. They should talk with Ronaldo and straighten things out. These things happen from time to time.

“What happens now is that people start talking bad about him, and say he is only trying to get a better contract. I do not think he would have acted like this if that was the case, though. He could be unhappy with just one thing, or about a number of small matters.

“Real Madrid will show him plenty of affection. A few people might think bad of him now, but everything will be forgotten again if he scores a few more goals. Everybody knows that he’s a key player and that Madrid need him. He is a unique player and irreplaceable.”

Ronaldo joined Real Madrid from Manchester United in the summer of 2009, and has since scored 150 goals for the Liga champions.