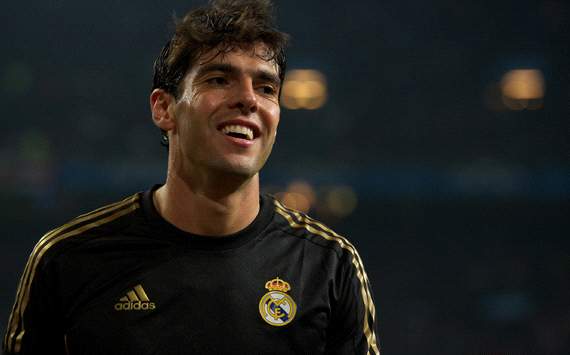 AC Milan remain favourites to sign Kaka this summer after making a renewed push to re-sign the superstar playmaker from Real Madrid, but only after the Brazilian was offered to the likes of Manchester United, Chelsea and Tottenham, Goal.com has learned.

Talk in Italy is growing that Milan are ready to strike a deal to bring Kaka back to the San Siro, with a number of meetings having taken place between officials from both clubs.

But sources have told The Sweeper that a loan switch to Spurs or Chelsea has been mooted as recently as this week as the Spanish giants look to offload the attacking midfielder and bring in Luka Modric, while Manchester United were also sounded out as a potential destination.

Real Madrid, however, are reluctant to let the 30-year-old leave without recouping a big fee and would prefer a permanent transfer for the player, who cost £56 million when he arrived from Milan three years ago.

Chelsea owner Roman Abramovich has always been a huge admirer of Kaka but the Blues are now embarking on a project to build a younger squad based around the likes of Eden Hazard and Oscar, while United also gave the proposal short shrift.

Spurs would be interested in the playmaker, but could not get near matching the current £7.9m salary he earns at the Bernabeu unless Real agreed to subsidise part of his wages – something, at this stage, the Spaniards are unwilling to do.

It is clear, though, that Real Madrid are ready to do business should they receive an offer in the region of £20m for a player that has now been offered to many of the top clubs in Europe.

West Ham completed the signing of Matt Jarvis from Wolves on Friday after their restructured £10.75m bid was accepted by the Midlands club.

But The Sweeper has learned that Fulham attempted to hijack West Ham’s swoop for the England international in midweek and, indeed, at one point were confident they would get their man.

The west Londoners matched the West Ham offer of £6.5m up front that was on the table and were prepared to pay the 26-year-old £40,000-a-week to take him to Craven Cottage.

The Hammers responded by increasing their initial instalment to £7.5m, which was £2m more than they were initially willing to pay when Sam Allardyce targeted the winger.

This was accepted by Wolves, who have been keen to ‘sell’ the transfer as a £10m-plus switch. However, The Sweeper has been told that some of the add-ons that make up the deal are quite ‘distant’.

HAMMERS TURN TO SPURS IN SEARCH OF TRAINING COMPLEX

Any visitors to West Ham’s training ground over the last few years will know that the cramped Chadwell Heath venue is not in keeping with the club’s ambition to be an established Premier League club.

One of the first priorities mapped out by co-owners David Gold and David Sullivan when they bought the club in 2010 was to improve the training facilities, preferably at a new centre.

Long-term, the Hammers still hope to build a state-of-the-art complex on the 29-acre site they own in Rush Green, Romford, two miles from their current training ground.

But West Ham officials have also been running the rule over other potential sites, including Tottenham’s training ground in Chigwell, which they will vacate next month to move to a £40m complex in Enfield.

The Spurs Lodge site would certainly be an upgrade on the portacabins of Chadwell Heath as the east London club look to improve their facilities for both the first-team and the Academy.