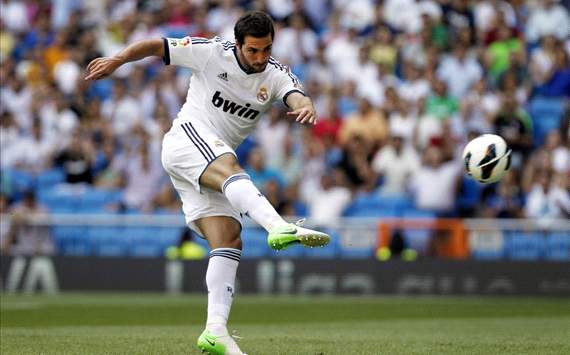 Real Madrid were less than convincing as they begun the defence of their La Liga crown with a 1-1 draw against Valencia at the Santiago Bernabeu.

Things began promisingly for the reigning champions as Gonzalo Higuain, who was picked ahead of Karim Benzema, put them ahead after just 10 minutes. But they soon became guilty of sitting back and failing to make their ball retention count and shortly before the break Jonas resotred parity.

Los Blancos were unable to regain their advantage in the second half and thus had to settle for a point in front of disgruntled and frustrated home supporters.

Madrid signalled their intent to score an early goal with an intense start that saw both Angel Di Maria and Cristiano Ronaldo take shots from long-range. Neither managed to work Diego Alves but it did not take much longer for Los Blancos to find the net.

Di Maria clipped the ball up to Higuain, who had sprung the offside trap, and the striker controlled the ball exquisitely. Yet after seeing his initial and follow-up efforts saved by the keeper the third time proved a charm as he rifled a volley into the back of the net with just 10 minutes on the clock.

With 25 minutes played Xabi Alonso narrowly missed the target with a powerful attempt from wide on the left that lacked the whip to bend in at the far post.

But patience soon turned to complacency for the hosts and Los Che capitalised by netting an equaliser three minutes before the break. Iker Casillas failed to clear Tino Costa’s fantastic delivery and Jonas duly headed the ball into the vacated goal. The keeper did however succeed in injuring Pepe who was subsequently withdrawn at half time.

Madrid began the second half as they did the first and after eight second-half minutes they missed a great chance to regain the lead. Mesut Ozil fed Di Maria but the winger failed to hit the target from a central position inside the box.

The game became absurdly stale with neither side offering much in the attacking department. Mourinho was the first coach to change things around as he replaced Lass with Karim Benzema on the hour mark.

It seemed to galvanise his side and six minutes later they almost scored their second of the night. A great centre from Di Maria found Alves out of position but Higuain’s header rattled the bar before being cleared away.

The effect soon dissipated though as Los Blancos lacked urgency to find a winner and it was not until the 82nd minute that they tested Alves. An extremely quiet Ronaldo drilled a cross into the area but Benzema’s ferocious strike was parried away by the Valencia stopper.

Mourinho’s men were unable to find the net again as the two sides shared the spoils on the opening weekend of La Liga. They will need to be far more clinical when they face Barcelona in the Super Cup in midweek.