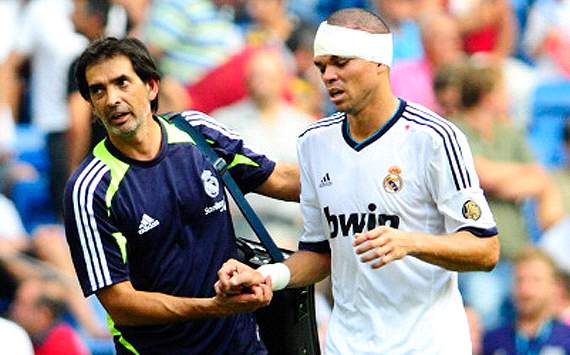 Real Madrid coach Jose Mourinho will have to do without the services of Portugal international Pepe in the upcoming Spanish Supercopa match away against Barcelona, as the defender recovers from a head injury, according to AS.


The centre-back picked up the knock in Madrid’s 1-1 La Liga draw with Valencia at the weekend, and spent Sunday night in hospital undergoing a series of tests.

“Normally, with a head injury, we have the player under observation for 24 hours. More importantly, we brought him to the hospital where we could carry out the necessary tests, all of which have come out okay,” club doctor Carlos Diez was quoted as saying on the club’s official website.

“He spent Sunday night under observation and everything is very good. We have decided, with the help of Real Madrid’s medical services, that the player could be discharged from the hospital without any problem.”

Even though all of the tests came out negative, and Pepe was discharged on Monday, he will not feature in the first leg of the Supercup tie against Madrid’s arch-rivals. Thursday’s match at Camp Nou kicks off at 22:30CET.