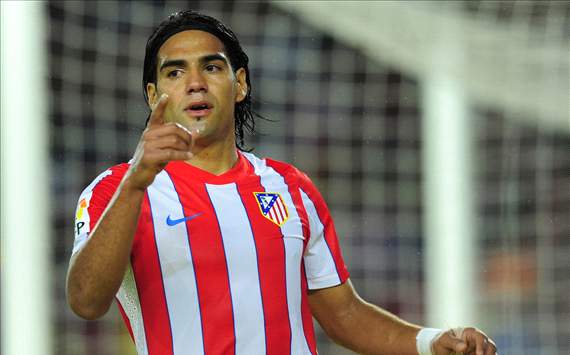 Radamel Falcao admits Lionel Messi and Cristiano Ronaldo are better players than he is and claims he is honoured to play alongside the world’s two finest footballers in La Liga.

Messi scored 73 goals in all competitions last season for Barcelona, while Ronaldo netted 60 for Real Madrid in 2011-12. Falcao recently claimed he could score as many as the prolific pair, who are likely to fight it out for this year’s Ballon d’Or award, but says he cannot hope to become a better player than Leo or Cristiano.

“Messi and Ronaldo are certainly the best in the world,” he told Goal.com in an exclusive interview. “They are both unbelievable. Actually I am very happy to be a contemporary of those geniuses, to enjoy them on the pitch.”

Falcao himself was on target 36 times in 50 games for Atletico last term as the capital club claimed the Europa League under Diego Simeone, who took over from the ousted Gregorio Manzano in December.

However, the Colombian striker believes this is merely the start for him in Spain.

“I’m only earning a name for myself,” he added. “I am well aware that my season was very good, especially as I’m not playing for one of the biggest teams in Spain, but I hope to improve and, certainly, as you gain international recognition, the facts speak for themselves.”

Atletico missed out on a Champions League place on the last day of the season and Falcao – who has won back-to-back Europa League titles with Porto and the Madrid side – hopes to play in Europe’s premier club competition in the near future.

“We will try to be in the Champions League and to get closer to the top league places,” the 26-year-old revealed. “And, hopefully this season, with some new signings, we may be better prepared to fight with those above us.

“I have not set myself a deadline to play the Champions League with Atletico, but I really want to play in it.”

While the top four looks a realistic goal for Simeone’s side, anything more seems unlikely for a team that last won La Liga in 1996 and finished 44 points behind Real Madrid last term. Falcao, though, is aiming high, despite the dominance of the top two in Spain.

“I am aware that Real Madrid and Barcelona are on a higher level than other teams in the league,” he admitted. “But I would love to win a title. I have set goals and challenges to myself and one of them is to fight to win the title or reach the Champions League.

“I know it’s very hard to win the league but the challenge remains because each team has goals depending on their capabilities.

“Yes, I dream of achieving important things with Atletico. But I know it doesn’t depend only on me and it also goes hand in hand with the sporting project that the club has for the next few years.”