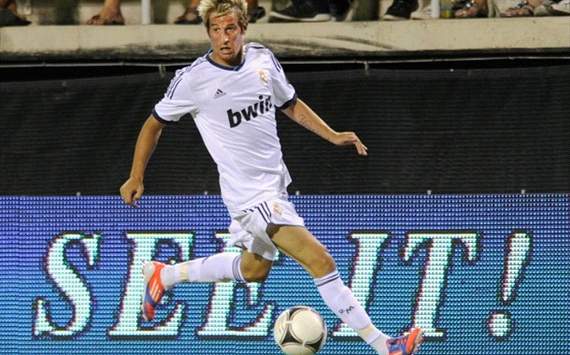 Real Madrid coach Jose Mourinho will have to make do without the services of left-back Fabio Coentrao tonight as the Spanish football federation has handed the defender a four-match ban following his red card in the 2-1 loss against Getafe on Sunday.


The Portugal international did not feature during Madrid’s surprise loss, but was dismissed in the closing stages of the encounter after insulting the match official while being seated on the bench.

Coentrao called referee Miguel Angel Perez Lasa ‘a son of a wh**e’ during the encounter, and the disciplinary committee has not taken the wing-back’s outburst lightly as they’ve banned him for four matchdays.

Meanwhile, Barcelona coach Tito Vilanova has been suspended for two games following his dismissal against Osasuna on Sunday.

Vilanova was sent to the stands in the 70th minute of overseeing his third consecutive win in charge of the Catalan giants, with the match referee reporting that the 42-year-old ‘angrily protested a sequence of play during the match after being warned by the assistant referee’.

The former assistant of Pep Guardiola will miss the matches against Valencia and Getafe due to the ban but is available to coach his side tonight because his transgression was deemed not as serious as Coentrao’s.