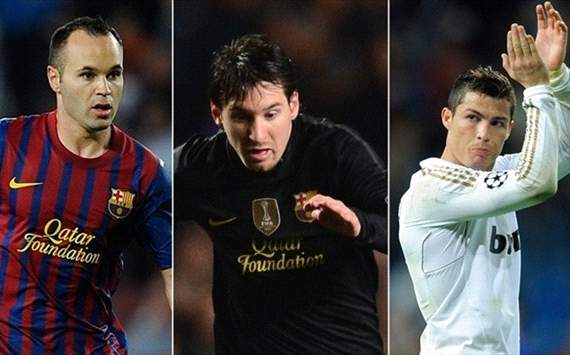 Spain midfielder Andres Iniesta has scooped Uefa’s award for the best player in Europe over the last season ahead of Barcelona team-mate Lionel Messi and Real Madrid star Cristiano Ronaldo.

The 28-year-old shined as Blaugrana endured a frustrating campaign throughout, seeing their Liga title surrender to arch-rivals Real Madrid and crashing out of the Champions League semi-final.

However, he was able to shine as his country reatained their European Championship crown in Ukraine and Poland in June and July, and was subsequently named the best player at the tournament.

And he has now scooped another award, pipping the Argentine and Portuguese forwards, despite their respectibve 73 and 60-goal campaigns.

“Without my team-mates at the Spanish national team and Barcelona I wouldn’t have won this individual trophy,” he commented.

His captain at club level, Carles Puyol was quick to congratulate the Albacete-born schmemer on his official Twitter page.

“Congratulations, Andres!! You deserve this.”

Iniesta received 19 votes from the pannel, while Messi and Ronaldo were both given the nod by 17 voters.

In last year’s edition of the award, Messi was named as the best player in Europe, with fellow Barcelona star Xavi and Ronaldo finishing in second and third place respectively.