Jose Mourinho has slammed his Real Madrid side after losing 1-0 to Sevilla on Saturday night, alluding to an absence on the part of the players who offered a lacklustre performance.

Los Blancos have made a comparatively poor start to the season, picking up just four points from their first four games, which places them tenth in the table and eight points behind leaders and long-standing rivals Barcelona.

Mourinho is unhappy with the attitude shown by the players, and it would seem not only in the game against Sevilla. Cracks have appeared recently in the set-up at the Santiago Bernabeu with Cristiano Ronaldo claiming he is ‘sad’ at the club.

“At the moment, I have no team,” Mourinho said to reporters after the game.

“Congratulations to Sevilla because they did everything to get the win and they deserved it without a doubt. And we deserved the loss in an awful game for us,” he added.

Mourinho continued, discussing the difficult form of late. “Today’s match was no different from Getafe. It was not very different from Granada either, apart from the fact we won. I do not think it has anything to do with the rumour of the past two weeks. For me it’s about the state of our collective spirit”. 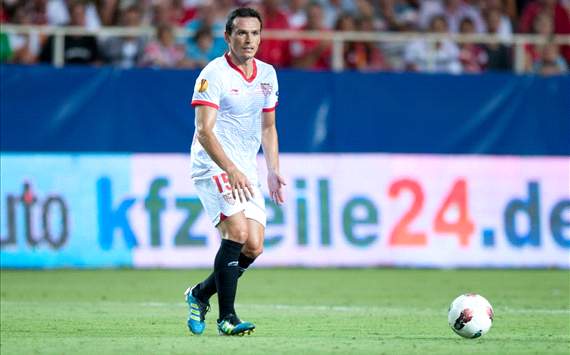 Real Madrid’s stuttering start to the defence of their Liga crown continued as they fell to a 1-0 defeat to Sevilla at the Ramon Sanchez Pizjuan.

The Rojiblancos had not beaten the club from the capital since October 2009 but got off to a great start as Piotr Trochowski put them ahead inside two minutes. But in a highly-charged encounter Los Blancos were unable to equalise, hitting the woodwork twice in the second half as they succumbed to their second league defeat of the season.

The match started at a frenetic pace with the hosts taking the game straight to Jose Mourinho’s men. A shot from the edge of the box inside the first minute was spilled back into the danger area by Iker Casillas but he recovered to stop Alvaro Negredo from tapping in the rebound.

Ivan Rakitic took the resultant corner and he dropped it on the penalty spot where it was met by Trochowski, who had escaped the loose marking of Angel Di Maria, and he volleyed into the roof of the net with aplomb.

Clearly aggravated at going behind, the visitors’ tempers began to flair and Gonzalo Higuain was fortunate to remain on the pitch after kicking out on Fernando Navarro despite winning a free kick for his side.

He confronted the left-back again moments later, but in the 10th minute attentions were turned back to the goal mouth. Cristiano Ronaldo thumped a free kick over the wall from 20 yards but his effort was too close to Andres Palop who dived across and turned it behind. The keeper then denied the Portuguese seconds later following a speculative attempt from deep.

Madrid began to assert themselves as the game went on and with 20 minutes played Mesut Ozil fed Higuain at the top of the box. The striker did superbly to spin his marker but he could not add an equally impressive finish, slicing his shot high and wide.

In an attempt to bring his side back into the match Mourinho replaced the disappointing Di Maria and Ozil with Luka Modric and Karim Benzema at half time.

The Croatian had an immediate impact as within just seven minutes he almost drew the visitors level. From  long range, Modric caught the ball superbly but Palop again got an important touch, tipping the effort onto the post.

With Sevilla unable to retain the ball, the reigning Liga champions hit the woodwork again on the hour mark. Palop failed to clear a free kick from the left and Benzema controlled the ball at the back post. He volleyed it across goal but Sergio Ramos headed onto the bar from inside the six-yard box.

Madrid continued to search for an equaliser but their efforts proved in vain as the hosts remained compact at the back despite dropping deeper and deeper in the closing stages. Ronaldo saw his free kick in the final minute of stoppage time fly over the bar in what proved to be their last chance of the game.

Victory moves Sevilla up to third in the table, but they may fall from there depending on Sunday’s games. Real Madrid meanwhile sit eight points behind arch rivals Barcelona in a lowly 12th position, and they could see that worsen if this weekend’s remaining results go against them.

Ivan Rakitic has praised the qualities of Luka Modric, claiming that the new Real Madrid signing’s vision separates him from his peers.

The midfielder completed a €33 million transfer to the Santiago Bernabeu from Tottenham in August and has already made a favourable impression on the Spanish champions’ fans.

Speaking prior to Sevilla’s encounter with Los Blancos in La Liga on Saturday, Rakitic took the opportunity to applaud the playmaking abilities of his Croatia team-mate.

“Modric is a great player, he is different from the rest. He thinks before others,” Rakitic told AS.

“If ‘The Special One’ signed him, there is little to discuss.”

Kick-off at the Ramon Sanchez Pizjuan is scheduled for 22:00CET.

Cristiano Ronaldo returns. Possibly not since his debut in 2009 or in the Clasico clashes against Barcelona has there been such elevated expectation surrounding the performance of the Portuguese in a Real Madrid shirt. He was sad, now he is back on board, and reportedly happy again. Madrid will hope he is ready, too.

They need him now, as much as before – perhaps more than ever. Cristiano is the cornerstone of this Madrid model, and without him it could crumble. The Copa del Rey in 2010-11; La Liga last year; this term’s Spanish Supercopa – none of it would have been possible without him. Madrid are no one-man team, but much like Barcelona are a shadow of themselves when Lionel Messi is missing, Real rely on Ronaldo.

Before linking up with Portugal for the World Cup qualifiers against Luxembourg and Azerbaijan, the 27-year-old dropped a bombshell. After netting twice against Granada in a 3-0 win at the Santiago Bernabeu and refusing to celebrate his goals, he told a mystified Madrid media that he was unhappy – and that the club knew why.

The timing was terrible. An international break followed and a torrid 10 days passed before Ronaldo’s return on Wednesday. He has since met with Mourinho, his team-mates and club president Florentino Perez. And so far, so good. All, apparently, is well. The player has reportedly requested more support from the club in the media – much like Messi receives at Barca.

Now he will have to do his talking on the pitch. Madrid meet Sevilla at the Sanchez Pizjuan on Saturday and all eyes will be on Cristiano. How will he play? Will he play well? Will he score? And if he does, will he celebrate the goals?

At his pre-match press conference on Friday, Mourinho claimed he can stomach sadness for Cristiano, providing the player’s performances do not dip. “If he is sad but plays as he can do, then that’s fine by me,” the coach quipped.

That is unlikely to be true, however. Mourinho knows full well that a prosperous player is likely to be a happy one and he will be doing everything he needs to behind the scenes to ensure his star man is fit, focused and feliz.

Mourinho was more concerned by his side’s stuttering start to La Liga. Yes, they have claimed the Spanish Supercopa by beating Barca, but four points from nine in the Primera Division is well below what is expected – and Real are already five behind the Catalans.

So the Portuguese will look to his compatriot on Saturday to produce something spectacular in Seville, where he has scored seven in his two league games under Mourinho. In 2010-11, Ronaldo racked up four in a 6-2 win, before adding three more in an identical scoreline last term. More of the same will leave Madridistas merry and the Cristiano crisis will be averted – at least for now.

Barca, meanwhile, pit their wits against a Getafe side who beat them last season and who have already defeated Madrid in the current campaign. Coach Tito Vilanova is without Alexis Sanchez and Andres Iniesta after both were injured on international duty, while Jordi Alba is ill. Messi, who has played every single minute for the Catalans in 2012-13, may be rested, too, after playing twice for Argentina in this week’s World Cup qualifiers.

It is only round four of La Liga, but already it looks like Satuday’s clashes could be key as the competition continues. And, as usual, Ronaldo and Messi are at the forefront. Especially the Portuguese.