Endrick will join Real in July 2024 when he turns 18 and stay with Palmeiras in the meantime.

Real have beaten a host of other top European clubs, most notably Chelsea, to the signature of one of the most sought after teenagers in the world.

Endrick’s family were hosted by Chelsea at the club’s Cobham training ground last month, as they explored a move for the in-demand youngster.

The Palmeiras president Leila Pereira has described this as “the biggest negotiation in the history of Brazilian football”.

She added: “Real Madrid’s proposal is compatible with Endrick’s enormous talent and corresponds to the sporting and financial goals that we have established since the beginning of negotiations”.

Real have had success in recent years when investing in Brazil’s most promising youngsters, having agreed deals for Vinicius Jr and Rodrygo at a similar age, with both players now first-team regulars.

Endrick has promised to give his all for Palmeiras in the next 18 months before he moves to the Bernabeu and thanked “the club of his heart” for granting him this move.

“I thank Palmeiras, forever the club of my heart, for offering me everything necessary to become what I am today, helping to achieve my dreams and respect my wishes and those of my family,” said the 16-year-old.

“Until I join Real Madrid, I will continue to dedicate myself as I have always dedicated myself to being able to offer Palmeiras even more on the pitch: more goals, more victories, more titles and even more joy for our fans.”

Real Madrid say Endrick will travel to the Spanish capital “in the coming days” to visit the club’s facilities.

The different approaches of Real Madrid and Barcelona

European football expert Kevin Hatchard told Sky Sports News Endrick is “somebody that the club has been aware of for some time”. 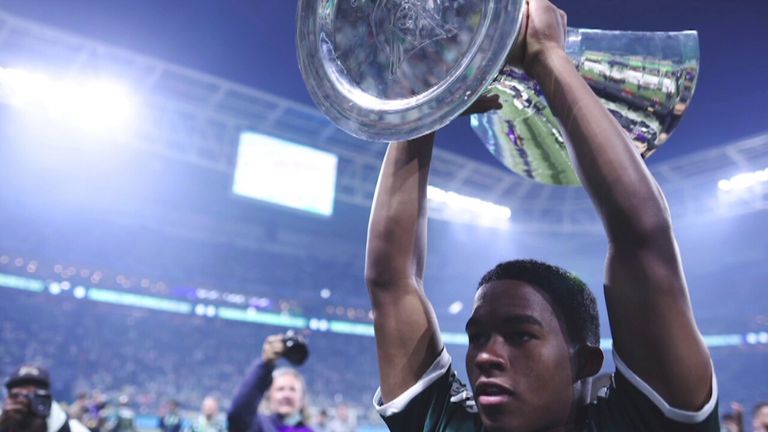 Hatchard said: “He’s a striker, a bit of a pocket rocket. he’s only 5 ft 8 in but he’s got a lot of power with his shooting and he’s somebody who’s been a bit of a YouTube sensation at one stage.

“He’s only played a handful of games, it isn’t somebody with a track record, but Real have done this before. They brought in Rodrigo. I think he’s been a sensational signing for them and Vinicius Junior has become one of the most impressive players in European and world football.

“So, because they’ve got that pathway, they can show potential signings and then they will come.”

Hatchard explained the difference between Real Madrid and La Liga rivals Barcelona in how the clubs have approached financial challenges of late.

“We’ve seen that Real Madrid still have this massive draw as a football club,” said Hatchard.

“They’ve been quite savvy in the last few years. They’ve kept their powder dry in the transfer market unless they’ve really wanted a player and they’ve gradually got that debt down.

“Real Madrid have slowly but surely managed to get that debt down. It will be interesting to see who was right in the fullness of time.”