?Real Madrid host Barcelona on Saturday in La Liga at the Estadio Santiago Bernabeu in what will be the second meeting between the two sides in three days, after their clash in the Copa del Rey semi-final on Wednesday.

Despite dominating vast periods of the game in mid-week, Los Blancos were made to pay for missing a host of chances by their arch-rivals, who scored three second-half goals to book their place in the final.

Although Santiago Solari’s side will be deflated by the manner of their recent defeat to the ?Blaugrana, they will undoubtedly be confident of avenging the result in the league where they have been very impressive over the past couple of months.

Barcelona’s win on Wednesday doesn’t truly reflect their form heading into yet another clash against ?Madrid as there were times that they could have, and probably should have conceded at the Bernabeu.

However, Ernesto Valverde’s side demonstrated the character needed to succeed in the biggest of games, a feat which they have now achieved in back-to-back fixtures after beating Sevilla on their travels 4-2 last week in ?La Liga.

With Los Blancos needing to deliver a response in front of their supporters to the result in midweek and Barcelona wanting to consolidate their position at the top of the league standings, Saturday’s El Clasico promises to be yet another thrilling affair.

Check out 90min’s preview for the game below:

Madrid will be without central defender Nacho Fernandez who is serving a one-game suspension after being sent-off in his side’s 2-1 victory at Levante last week.

Midfielder Marco Llorente is also expected to miss Saturday’s clash due to a muscular injury whilst playmaker ?Isco is doubtful. Marcelo and ?Gareth Bale will he hoping to make an appearance after being left out of recent games by Solari, while Marco Asensio may also feature.

Barcelona will travel to the Bernabeu without long-term absentee Rafinha yet Arthur Melo is available for selection after making his return from injury with a late cameo on Wednesday.

Central defender Samuel Umtiti may play some part on Saturday against Madrid, depending on fitness, with Carles Alena and Philippe Coutinho who are also pushing for a start.

Madrid and Barcelona have played each other on 240 occasions with Los Blancos leading the rivalry with 95 competitive victories to the Blaugrana’s 95.

The two sides have already met on three occasions this season with the corresponding league fixture ending in a 5-1 victory for Valverde’s side as a hat-trick from ?Luis Suarez as well as goals from Arturo Vidal and Coutinho secured all three points at the Camp Nou.

Strikes from Madrid’s Lucas Vazquez and Barcelona’s Malcom ensured that the first leg of the Copa Del Rey semi-final ended in a 1-1 draw in February, yet it was the Blaugrana’s supporters who would be celebrating once again as they saw their side sweep aside their arch-enemies 3-0 in the return fixture on Wednesday.

A win for Los Blancos on Saturday would be their first in five El Clasico encounters.

Madrid’s recent run of results in La Liga have been very encouraging with Solari’s side picking up 18 points from their last seven games, with their only slip up coming against Girona at the Bernabeu in February.

Since replacing Julien Lopetegui in October, Los Blancos have steadied the ship, producing a number of impressive victories against the likes of Atletico Madrid, Real Betis and Alaves which has seen them move up to third in the standings.

Barcelona meanwhile are in pole position to defend their La Liga title as they currently lead the division by seven points from ?Los Rojiblancos.

The Blaugrana’s recent form under Valverde has seen them go on a run of nine games without defeat yet four of those fixtures have ended up in draws, indicating that on occasion they do struggle to break down their opposition, despite the creativity of? Lionel Messi and Suarez.

Here is how both sides have fared in their last five La Liga matches:

Madrid’s defensive woes this season has already seen them concede 30 goals in La Liga and with a Barcelona side who have notched 100 in all competitions visiting the Bernabeu, it will be an extremely tough task to keep a clean sheet on Saturday.

Los Blancos will be hoping that Vinicius Junior, who was extremely impressive during midweek, can add some end product to his game, while the likes of ?Luka Modric, ?Toni Kroos and Casemiro will need to be on top form in order to win their midfield battles. 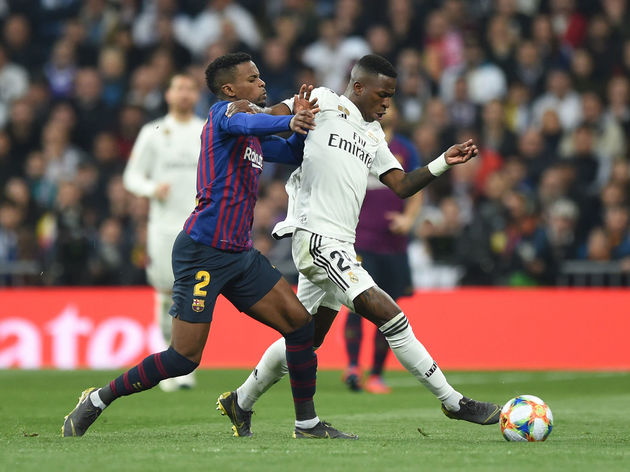 Suarez’s brace for the Blaugrana on Wednesday will have given the Uruguayan immense confidence going into the weekend’s fixture, while Messi is due a goal in El Clasico having netted in the fixture on 26 previous occasions.

If Madrid can start the game as well as they did on Wednesday but this time convert their chances, they may be able to secure at very least a draw in front of their supporters.

However, after suffering such a demoralising defeat at the hands of Barcelona just three days prior to this latest El Clasico match-up, they could find themselves incapable of overcoming the mental hurdle of beating their arch-rivals.

With their fearsome front three in full flow this season, the Blaugrana should just nick it, taking all three points back with them to Catalunya.