There is symmetry between Atletico Madrid’s improvement under Diego Simeone and Cristiano Ronaldo’s development into the very best player in the world.

Simeone, working largely with the same group of players he had when he took over in 2011, has transformed Atletico Madrid from top to bottom. During that same time frame, Ronaldo has delivered emphatic responses to those accusations that he was unable to influence the most important matches. He’s been so consistent for such a long time that it is easy to lose sight of the fact that the Real Madrid man was once regarded as a big-game bottler earlier in his career.

Throughout his time at Manchester United and during the first half of his international career, those big games which come to define a player’s entire career largely passed him by or so the story was told.

There was Euro 2004, the final of which Ronaldo regards as the lowest moment in football. Four years later, the accusatory fingers were again pointed at him. There was the 2006 and 2010 World Cups which brought only fleeting examples of his brilliance.

The 2006 campaign was ultimately extinguished by Zinedine Zidane. The current Real Madrid assistant manager has this to say about Ronaldo’s rise. “People need to realise who Cristiano Ronaldo is,” Zidane told AS. “He’s a truly remarkable professional football player, who works like no other athlete.”

That is the general consensus about a man who is still perceived in the public eye as conceited. Primarily it is that dedication that has put Ronaldo where he is.

“In the swimming pool with my girlfriend, sometimes we like to have a race,” he told CNN in 2012. “I win because I don’t like to lose. It’s as simple as that. I’m a competitive man.” 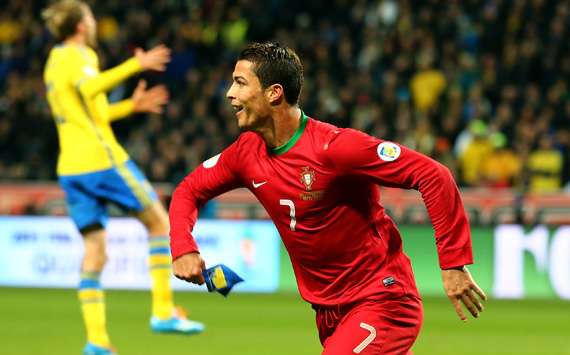 His personal rate of development since departing Manchester is off the charts. For Portugal he scored 25 times in his first 79 caps. He scored 24 in the next 31. Euro 2012 was his most explosive tournament to date with vital goals against the Netherlands and Czech Republic. In qualifying for the World Cup, Ronaldo scored four times in the play-off matches against Sweden. His hat-trick in the second leg was enough for Fifa to re-write the rules for Ballon d’Or voting.

He won it, naturally. On stage he cried, proving individual accolades inspire him as much as team glory. The man who finished second, Lionel Messi, has aided Ronaldo’s cause to be the best. “I think we push each other in competition,” Ronaldo admitted to CNN. “This is why the competition is so high. This is why Real Madrid and Barcelona are the best teams in the world.” Without Messi around to irritate him by winning individual titles, Ronaldo would not have reached this standard.

It’s been tough for Ronaldo at Real Madrid on a collective level. Despite his brilliance, he has only one Liga title and one Copa del Rey to show for his efforts. He has been thwarted at almost every turn by Barcelona and Messi. He should have more trophies. His dedication to his work deserves that.

The scale of his improvement against Barcelona in particular has been impressive. Fixtures against them were initially dreadful. That 5-0 in Camp Nou was the nadir. Redemption came with a superhuman header in the Copa del Rey final of 2011 to win the trophy. He’s taken to scoring against Barca with considerable ease since. He’s netted 13 times in 21 games against them in the white of Real Madrid.

In the Champions League, too, his record since arriving at the Bernabeu is astonishing. He scored 16 goals in his 55 games in Europe for Manchester United. Sixteen alone have come this season for Real; a new record. Overall, he’s struck 50 in 51 Champions League games since joining. He has dominated ties against Manchester United and Bayern Munich in the past few seasons. He may have missed a penalty in that 2012 Champions League semi-final but it was his first-half goals that put Real in with a shout in the first place.

Atletico may have risen in prominence under Diego Simeone but Ronaldo has routinely found the net against them too. His total is 12 in 13 games against the other side in Madrid. When Ronaldo started out at the Bernabeu, the games against Atletico were big only in the sense that they were derby encounters. Simeone, however, has earned the right to put his side into decisive matches against Real – both in La Liga and in Europe.

No more doubts, then, about Ronaldo’s appetite for the major battles. He does not discriminate against any team now; he scores against them all. The Champions League final in his nation’s capital of Lisbon is tailor made for him. He has the chance to lead Real Madrid to la Decima.

He can help Real avenge their league defeats to Atletico and remind them who are the top dogs in the Spanish capital. This is a big game in every sense of the word. This is one of those big games that Ronaldo has trained himself to dominate. Simeone’s well-drilled unit, forged over three arduous seasons might not be enough to stop Ronaldo – the man who can’t stop improving.