Diego Simeone’s side battled through another difficult assignment, with the efforts of their star striker symptomatic of the courage that leaves them in control of the title race

Fortune favoured the brave. Atletico Madrid huffed and puffed and eventually blew away city rivals Getafe in a 2-0 victory on Sunday, but it looked to have come at a cruel cost as Diego Costa collided with a post when he bravely slid in to score a late second. In the end, however, it was just a scare and Diego Simeone’s side sit four wins from La Liga glory – whatever Barcelona and Madrid do over the next five fixtures.

Costa’s bloodied shin left the Brazil-born forward in agony and appeared a brutal blow to the title hopes of this terrific team. But it turned out to be worse than it looked, with positive news quickly filtering from the dressing room. “It’s just a cut,” confirmed Atleti, while Simeone’s own personal press officer, Pepe Pasques, tweeted: “Relax everyone! Everything is fine. We just need to fix the post!”

The moment was nevertheless symbolic. It is often said that some players will run through brick walls for their coaches and that sums up Simeone’s side and, in this case, Diego Costa. Where many may have been more concerned with their own health, the striker saw not the post, nor the danger, but only one objective: to score the goal that would win the match.

In truth, he should have done so earlier, when his poor penalty was saved by Jordi Codina at 1-0. Getafe were also down to 10 men after the spot kick saw Alexis Ruano red-carded for the foul, but the home side still threatened and the game was not officially over until Costa’s clincher. 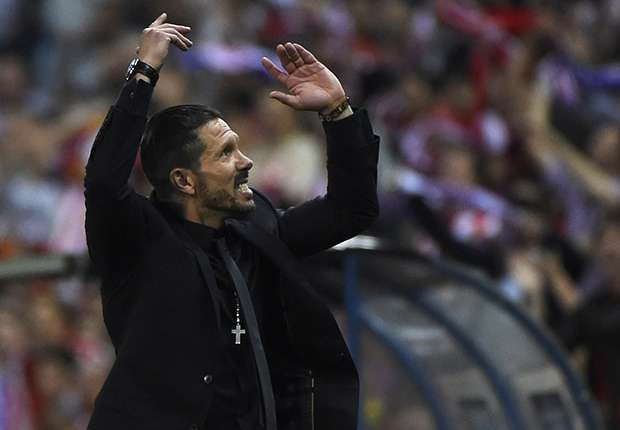 Fired up | Simeone’s side have enjoyed another wonderful week

Atleti, of course, beat Barcelona only on Wednesday to reach the Champions League semi-finals and did so in the absence of their star striker. But to face five fixtures without their talisman – and in such cruel circumstances – would have dealt a hammer blow to the Rojiblancos‘ hopes of winning La Liga for the first time since 1996.

Simeone the player was the heartbeat of that team, a powerful presence in midfield as Radomir Antic’s side claimed both La Liga and the Copa del Rey. This time Diego is the architect, an impassioned and fervid figure bellowing instructions from the sidelines. Noisy, restless and ever intense, the Argentine acts out every move and contests every decision.

On the pitch, his players respond in kind and having been written off so many times over the course of the current campaign, Atleti are suddenly within sight of an astonishing achievement. With five games left, they now need just four wins to seal the title – and can even afford to lose at Barcelona on the final day of the season.

Barca dropped off the pace with a 1-0 defeat at Granada on Saturday, failing to react after Wednesday night’s European exit at the hands of Atletico. Madrid, meanwhile, cruised comfortably with a 4-0 win at home to Almeria, but Carlo Ancelotti’s men need their city rivals to drop at least four points (the title is decided on head-to-head if two teams finish with the same points total) if they are to claim La Liga. And at the moment, that doesn’t look likely.

Meanwhile, Simeone said he wouldn’t talk about the title race until there were five fixtures remaining. That day has now arrived and his side are ahead at the top of the table. Predictably, however, he said: “We are just focused now on the game against Elche and on recovering our players for what is another final on Friday. We have five finals left.”

The discourse doesn’t differ and one game at a time, true to his philosophy, Simeone’s side valiantly march on towards the title – with Costa bravely leading the line. Tough trips to Valencia and Levante await, along with home games against Elche and Malaga, followed by what could be a dead rubber at Camp Nou or a potential Liga decider, but who would bet against Atletico now?