The Bundesliga champions reached the semi-finals at the expense of Manchester United, but the unstoppable machine from the start of the season is slowing down

Although no team has won back-to-back Champions League titles since the rebranding of the competition in 1992, title-holders Bayern Munich started the season as red-hot favourites to retain their trophy.

The Bundesliga giants quickly affirmed their status as Europe’s standout team with some indomitable performances in the group stages, most notably in the 3-1 away victory at Manchester City, but they have been struggling to live up to the high expectations in the knockout stages.

After failing to impress against Arsenal in the round of 16, they were caused even more problems in the quarter-finals by a Manchester United side at their lowest ebb for a quarter of a century.

Pep Guardiola’s men came away from Old Trafford with a hard-fought 1-1 draw in the first leg and fared little better at the Allianz Arena on Tuesday, despite eventually recording a relatively comfortable 3-1 win.

Very much like last week, Bayern dominated possession but failed to create any chances of note until Patrice Evra’s opener just shy of the hour mark shook them into life.

While they did display remarkable mental strength as Mario Mandzukic immediately restored parity before Thomas Muller and Robben put the tie to bed, Bayern no longer look unbeatable. 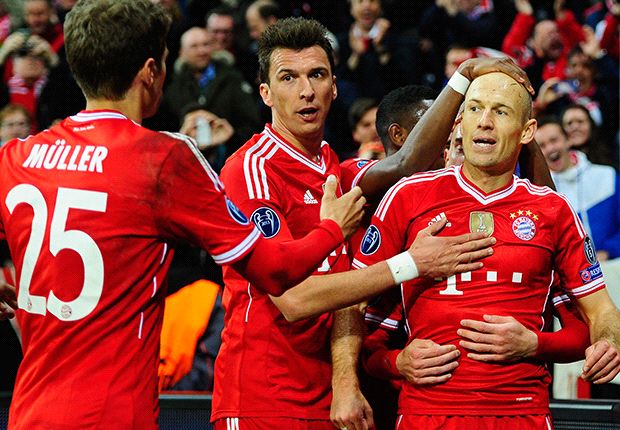 The Bavarians looked short on ideas against the Premier League strugglers and the remaining teams in the Champions League will have noticed how United’s ultra-defensive game-plan frustrated Guardiola’s side.

Atletico Madrid showed against Barcelona that they have the potential to trouble any team and will fancy their chances against Bayern, too. The Vicente Calderon side have impressed throughout the competition with their dogged discipline and lethal counterattacks and should no longer be considered underdogs.

Tuesday’s ties, meanwhile, illustrated that Real Madrid – second favourites prior to this week – and Chelsea are far from invincible, too. The Santiago Bernabeu outfit were fortunate to progress to the semi-finals as Dortmund spurned numerous chances to turn around a 3-0 deficit in the second leg, while Jose Mourinho’s men needed a late Demba Ba goal to shake off Paris Saint-Germain on the away goals rule.

Bayern will still enter Friday’s semi-final draw as favourites to win the competition, but the gap between them and their rivals has closed dramatically. The Champions League is wide open.