It wasn’t pretty. Atletico Madrid dug deep to grind out yet another vital victory on Saturday – a win which keeps Diego Simeone’s side on top of La Liga with six games remaining. Every week they are written off, but each time they prove people wrong.

It didn’t need to be pretty. Atleti are associated with a more direct and physical game in any case, which is why Simeone’s style suits the philosophy of this club to perfection. Saturday was all about winning and every game is the same: get the three points and then move on – one match at a time.

Villarreal at home represented another tough test, especially after Atleti’s players ran their hearts out in the Champions League quarter-final first-leg at Camp Nou on Tuesday night – and particularly because they were without their talisman, striker Diego Costa.

All it took in the end, however, was Raul Garcia’s first half header from a corner: an ugly goal to win an ugly game. Seeing his players toil in the second period as Villarreal bossed the possession, Simeone then geed up the fans with a passionate rallying cry – and the supporters responded to will his team to victory. 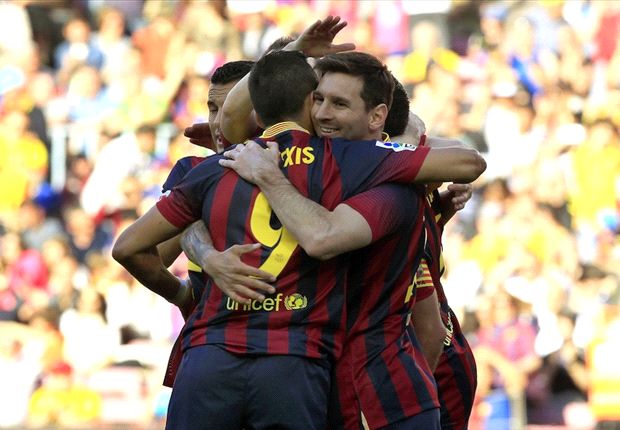 “Many people wonder why we are Atleti,” Simeone said afterwards. “It’s because of passion, hard work and humility. If we have to suffer, we suffer.

“All of the games until the end of the season will be tight. We were tired in the last few minutes. We didn’t have the strength and the energy we usually have, but the team played with their heads.”

Four of Atleti’s last five wins have come via a one-goal margin, but the title will be decided by the head-to-head and that means five more victories and a draw at Barcelona on the final day would be enough. It’s still a lot to ask, especially with tough trips to Getafe and Valencia also ahead, but Atletico keep on grinding out wins in a manner reminiscent of Jose Mourinho’s Chelsea side of 2005 and 2006.

Like Atleti, Barca are also in control of their destiny after beating Betis 3-1 in a soporific soiree at Camp Nou straight afterwards, which was decided by two Lionel Messi penalties (the second saved but converted on the rebound) and a Jordi Figueras own-goal.

Against La Liga’s bottom club, the Catalans cruised to all three points with minimal effort, but – like Atleti – will need to perform much better in their trip to the Vicente Calderon in the Champions League on Wednesday.

“We will analyse it, but let’s leave the team’s performance to one side,” coach Gerardo Martino told reporters after the game. “What matters 100 per cent is the result.”

And it was the same for Madrid at Anoeta. Carlo Ancelotti’s men made light of their toughest remaining fixture with an impressive 4-0 win, succeeding at a ground where Barcelona lost 3-1 earlier this year.

Even without the rested Cristiano Ronaldo, Madrid were the superior side and went ahead just before the interval through Asier Illarramendi. Gareth Bale made the result safe 20 minutes into the second half before Alvaro Morata and Pepe rounded off a 4-0 success which follows the team’s 3-0 win at home to Borussia Dortmund on Wednesday.

Those results represent a big boost to the side’s flagging confidence following recent defeats against Barca and Sevilla, but it still may not be enough in La Liga, with Madrid still three points adrift.

“I’m very happy,” Ancelotti admitted. “I have a team who like to fight. I am very proud to coach this team.”

None of it was pretty, but the fight for La Liga continues and is set to go right to the wire, with Atleti and Barca in pole position, but Madrid still hanging on in a three-way fight for the title. With six games left, there’s still all to play for.