The Italian has history when it comes to capitulations in Europe’s elite competition and almost suffered another damaging defeat on Tuesday. His team need to improve…

Yellow fever. For the second season in succession, Real Madrid were played off the park by Borussia Dortmund and while last year’s semi-final saw Jose Mourinho’s men fall just short after a second-leg revival, Carlo Ancelotti’s side suffered what was very nearly a colossal collapse.

Confident of progression following their 3-0 win at home to Dortmund in last week’s first leg, Madrid soon found themselves on the back foot at the Signal Iduna Park on Tuesday and, in the end, only the woodwork and some superb saves from Iker Casillas kept them afloat.

Madrid may have been without their finest footballer, Cristiano Ronaldo – but that was no excuse for this weak and pallid performance. After all, Dortmund were missing a host of first-team players themselves – and still they pierced holes in the visitors’ delicate defensive line with effortless ease.

The early onslaught will have been expected, but Madrid dealt with it poorly, struggling to retain possession and constantly losing the ball amid a sea of swarming yellow shirts. Nevertheless, they were handed a perfect opportunity to make the tie safe as the referee awarded a very dubious penalty for a Lukasz Piszczek handball. But Angel Di Maria slipped in his run-up and scuffed a shot which was comfortably saved by Roman Weidenfeller.

Seven minutes later, things then became much more complicated for Madrid – and of their own doing. Pepe, so excellent in the first leg, headed the ball back towards Casillas, unaware that Marco Reus was waiting in the wings to pounce with a simple finish. 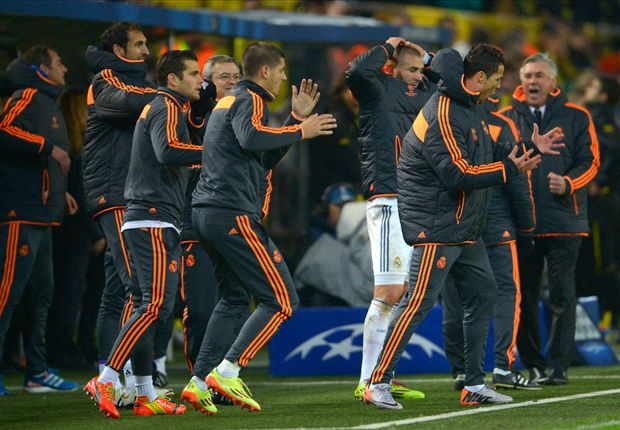 Lacking a leader | Ronaldo reacts furiously on the sidelines

Reus smashed home a second from a rebound 13 minutes later after Robert Lewandowski had hit the post in what was to be the Pole’s final Champions League game for Dortmund ahead of the striker’s summer move to Bayern Munich.

At the time, it looked anything but that, because Madrid were all over the place and Sergio Ramos was fortunate to receive only a yellow card for lashing out at Lewandowski, while Xabi Alonso looked certain to be sent off for a second offence early in the second half as the referee reached for his pocket and then appeared to change his mind after realising the Basque had already been booked.

The introduction of Isco for the awful Asier Illarramendi improved Madrid after the break, but still Dortmund remained on top and Henrikh Mkhitaryan should have levelled the tie after rounding Casillas. Instead, he hit the post.

Casillas then made stunning saves to deny both Mkhitaryan and Kevin Grosskreutz in the final stages, while Madrid missed chances at the other end through the frustrating figure of Gareth Bale and the languid Karim Benzema. The Welsh winger also had a good penalty appeal turned down in the frantic finale, which saw the home side commit more and more men to attack only to ultimately fall short in heroic defeat.

But if Dortmund were heroes, Madrid were villains. Lacking leadership all over the pitch, picked apart in defence and midfield at will and missing a decisive finisher in attack, this match showed the team have learned little since the 4-1 loss at this same ground last season.

Then, Jose Mourinho moaned that his side had looked naive in a physical battle, famously complaining that “Lewandowski scored four goals and we didn’t even foul him once…”

On Tuesday night, Mourinho added another epic celebration to his collection as he ran down the touchline in jubilation at Demba Ba’s late clincher for Chelsea against Paris Saint-Germain. At the same time, Madrid’s players also secured their place in the semi-finals of the competition, albeit in a very different mood, trudging off the pitch with their tails between their legs – bruised, battered and badly beaten on the night.

Exactly a decade before Tuesday’s game, Ancelotti’s AC Milan suffered a 4-0 defeat at Deportivo La Coruna to throw away a 4-1 first-leg lead. And the Italian has history where Champions League collapses are concerned, having also seen his Juventus side throw away a 2-0 advantage at home to Manchester United in 1999 and his Milan team infamously lose the 2005 final after going 3-0 up over Liverpool in Istanbul.

This was almost another capitulation of epic proportions and shows both Ancelotti and Madrid (after their third defeat in 12 days) have much work to be done (mentally and tactically) before they can truly threaten Europe’s elite.