At halftime of the Philadelphia Eagles-Pittsburgh Steelers pre-season game at the Lincoln Financial Field (where Madrid plays on Saturday), Xabi Alonso, Sergio Ramos, Álvaro Arbeloa, Esteban Granero and Gonzalo Higuaín (or as Couzin Ed, the Eagles’ on-field announcer said, Sabi Alonso, Ser-gee-o Raymos, Al-vero Arbeloa, Esteban Gran-nera and Gonzalo Higueyin) came down from the box where they were watching the game with the rest of their teammates to attempt some field goals.  By the way, watch out for Xabi posing to the side in many of the subsequent gifs and photos.

Xabi made his field goal, but Sergio’s veered too far to the left.  Álvaro Arbeloa, wearing the jersey of Eagles wide receiver DeSean Jackson, barely made his (it arched too soon) and Esteban celebrated making his by doing his Pirate celebration!

It was apparently too easy for the boys from that part of the field, so for Gonzalo Higuaín’s attempt, he was moved back to the 50-yard line.  He didn’t end up making his field goal, and his teammates made fun of him for that afterward.

Watch the video of the halftime show here!

Then Sami Khedira was interviewed at the Phlite Deck.  He said (in English, as you can see in the video) that it was really hot the last time they played there (the other day, Cris said of last year that he remembers the heat and how the team played like “snails” because it was so hot), and called the fans, the stadium and the city “amazing.”  When asked for his opinion of American football, Sami said they’re all having a great time and are happy to be there (in other words, they probably got a bit confused, since it’s not an easy game for a novice to understand, no?).

On hand to cheer the boys on were Eagles’ players Chas Henry and Jon Dorenbos, who had been their coaches earlier in the day (see below).

They couldn’t leave the stadium without a group photo.

They look great with the(American) football, no?

I wonder why Iker didn’t try his hand at this activity?  He would be the most obvious choice, since he does spend a lot of time kicking the ball down the field.

One last photo from the Lincoln Financial Field.

In (west) Philadelphia (born and raised).*

Madrid had traveled to Philadelphia following the conclusion of their game in New York.  On Thursday, they trained in the afternoon at the NovaCare Complex, the practice facility of the Philadelphia Eagles.  Prior to the session, they got to experience what it’s like to be holders and kickers, as some of the boys were to show off their skills at halftime of the pre-season game between the Eagles and their cross-state rivals the Pittsburgh Steelers later that night.  They were coached by Eagles players Chas Henry, Alex Henery and Jon Dorenbos, the Eagles’ holder/punter, kicker and long snapper, respectively.

As we can see, the boys were quite proficient, which caused Álvaro Arbeloa to tweet that the Eagles had signed Gonzalo Higuaín.  Here’s the sequence where Álvaro acted as the holder to Pipita’s punter.

After that, they trained as normal, recovering from the previous day’s game.

In the morning, the coaching staff and several of the players had also taken a walk around their hotel, the Ritz Carlton.

No Real Madrid outfits for Chori and Calleti?

Notice the Yankees cap, because that’s our next topic of discussion…

* to hear the Spanish version of the intro, go here.

From the highlights, it looks like Madrid played a fairly good game at Yankee Stadium, with authentic golazos and great assists as well, as they beat Milan 5-1.

Xabi went native prior to the game, donning his Yankees cap, and showing the others the highlights of the stadium, as he had been there before to watch some games.  And I wonder what was on his mobile phone that was so amusing?

Winking (in a good way) Cris! 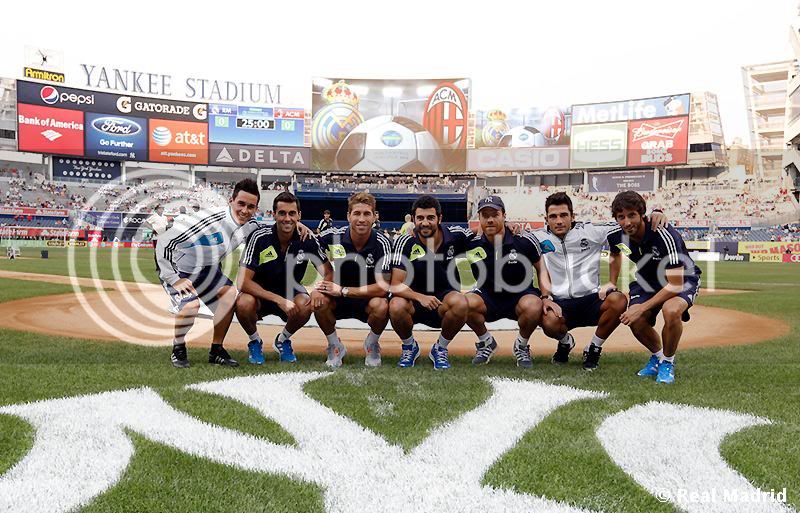 Madrid has been busy issuing official announcements lately.  On Wednesday, Joselu’s transfer to Hoffenheim was the subject of the announcement.  I hope the buyback option gets exercised in the future!  Then on Thursday, they announced that Sergio Canales has been transferred to Valencia, with Madrid retaining a buyback option (Sergio subsequently told the press that “our first objective is to win in the Bernabéu”), and that Ángel di María’s contract has been renewed through the 2017-18 season.

Brigitte Yagüe, who won a silver medal for Spain in the taekwondo 49 kg category at the Summer Olympics, is a madridista.  In past interviews she has said “soy muy fan del Real Madrid” and confessed that she would love to take the honorary kickoff at the Bernabéu.  Apparently, that’s going to happen soon!

According to Marca, MFC Álvaro Borja Morata Martín will remain inscribed with Castilla, which will allow him to play for both the first team and Castilla.  All sides agreed to this move, believing it would be the best thing for ABMM.  Despite not having a first team ficha, ABMM will be a first team player in all effects, training with them and joining in team activities.  The team is also looking for a forward to cover the hole left by Joselu…

Speaking of Joselu, he gave an interview to Marca where he spoke of his new start.  He said moving to the Bundesliga is a good change for him, and he’s very excited and happy with his decision.  The canterano revealed he left Madrid because he got this opportunity and he believed it was the opportune time to take a step forward in his career, although of course he’d like to return to Madrid.  Joselu also says he’s already spoken with Dani Carvajal and he’s sure they’ll see each other a lot, because they’re not too far apart (about 300 kilometers), and that he already has a German tutor so that he can learn the “very difficult” language.

Castilla tied Alcorcón 1-1 on Wednesday, meaning they still have not lost in the pre-season.  Pedro Mosquera scored for the second team with a very young looking Zinedine Zidane (it’s the backwards cap) and his sons Luca and Enzo (perhaps the other two are there as well) watching in the stands.  I wonder if Zizou had that much hair when he was their age?