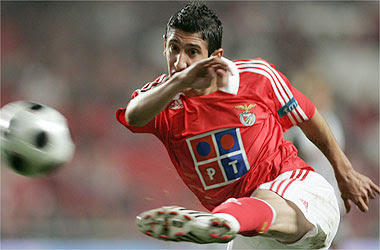 Argentine winger Angel Di Maria has told his Benfica team-mates that he is leaving the club to join Real Madrid next season, according to reports from Spain.

The 22-year has long been thought to be heading to the Spanish capital this summer after los Blancos admitted their interest in securing his services, but AS reports that the player has already said goodbye to his colleagues, all but confirming that the transfer has been finalised.

Benfica value Di Maria in the €40m bracket and until now Di Maria has refused to be drawn on questions over his future, but after Benfica clinched the Portuguese league title, Di Maria is thought to have said, “Boys, next season I will play for Real Madrid.”

His agent, Jorge Mendes, said that an agreement had been reached in principle to let him leave the Lisbon club, and that both he and the player were aware that Jose Mourinho would be appointed as coach following the departure of Manuel Pellegrini.

The full details of the transfer are not yet known. Real Madrid squad players such as Royston Drenthe and Ezequiel Garay have been mentioned as makeweights in the deal, and the Spanish giants are thought to be hopeful of concluding a deal before the World Cup starts on June 11. (source)